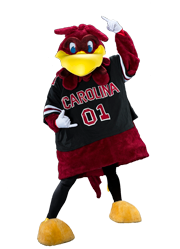 History and Biography of Cocky

Cocky first took action at USC events in 1980 when he came in to take over his father (Big Spur's) place. Cocky soon won the hearts off all the Gamecock fans all over and now is one of the most recognizable figures to young and old at USC. Cocky has also captured national attention in the UCA (Universal Cheerleading Association) Mascot Competitions. In 1986, Cocky brought home his first UCA Mascot Championship. He continued his success in the competitions each year and rose to the very top a second time in 1994 bringing home his second Championship. Cocky won the Capital One Mascot Challenge by receiving the most votes in 2004. In 2008, Cocky competed and won another National Championship title in the National Cheerleaders Association’s Mascot Competition in Daytona, FL.

One of Cocky's trademarks that is highly recognized by all Gamecock fans is his 2001 Magic Box entrance. The spectacular entrance can be seen at every home football game when the Gamecocks take the field. The Magic Box entrance is one of many things that Cocky does to get the crowd pumped up and cheering for the Gamecocks. Cocky can be seen pepping the crowd up not only at football games, but at men's and women's basketball, volleyball, men's and women's soccer, baseball, softball, swimming, golf, track, and tennis events as well. Cocky also does many appearances around the community as well, so be sure to catch him at either an athletic or community event.